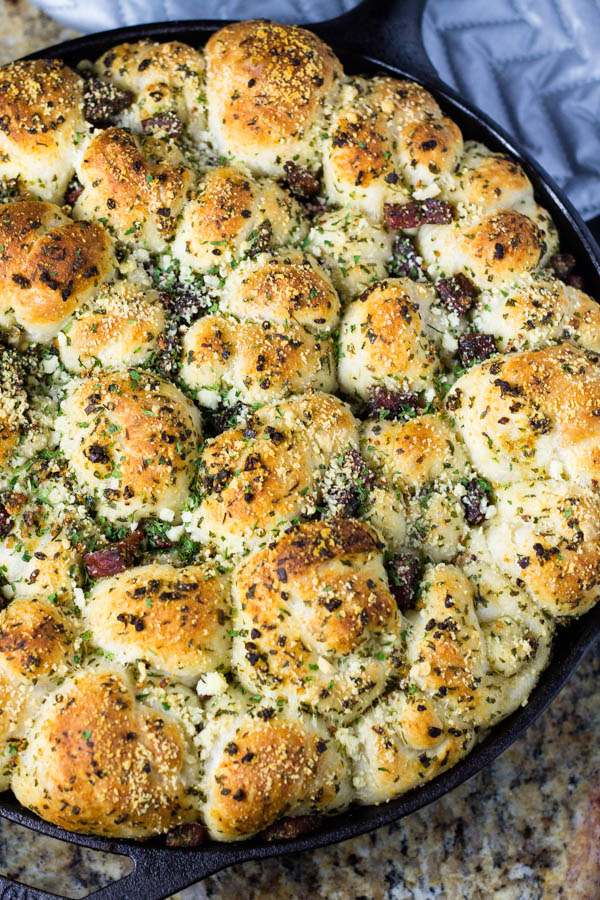 These skillet pull apart garlic knots are a definite crowd-pleaser. There is something about the combination of garlic, Parmesan cheese, Pecorino Romano cheese, chives and parsley with the warm and soft bread that simply cannot be resisted. They can be dipped in your favorite pizza dipping sauce (my personal favorite is marinara), or enjoyed on its own.

I decided to make my own bread, but for convenience it is possible to use store bought pizza dough.  To make the topping, I cut the pepperoni into small cubes. I found that cutting the pepperoni into as small-as-possible cubes was better so that they can stick to the bread easier.  The pepperoni is cooked with the garlic and some red pepper flakes for a little bit of heat. Chives and parsley are added for flavor and color. Finally, the Parmesan cheese is added. All that was left was to toss the garlic knots in this super-flavorful mixture.

After baking the knots in the oven, I had crispy golden brown knots that are crunchy on the outside and soft in the inside. Each and every bite had a punch of garlicy Parmesan cheese flavor. I will definitely be making this again in the future!

This site uses Akismet to reduce spam. Learn how your comment data is processed.

Hi, I'm Liza and welcome to my blog. Salu-salo is a Filipino word that means getting together with friends and family to eat. I am not a cook by profession, but I spend a lot of time in the kitchen, cooking for my family. Read More…

SIGN UP FOR OUR NEWSLETTER AND GET THE “ASIAN TAKEOUT E-BOOK” FOR FREE!